I recently did an interview with Street Books librarian Laura Moulton, who runs a free bike-powered library for people who live outside.

Good news update:  the original project was funded by a Regional Arts and Culture Council grant, but Laura just announced that it will live on past the term of the grant, which was due to end in early September.  Based on the enthusiastic response she’s gotten, from both patrons and donors, this is an idea whose time has come.  There’s someone in Seattle interested in starting a Street Books library there, and who knows where else?

You can read the full interview here.

Once I had a kid who’d torn it up a little because it was his 21st birthday, and he told me so.  He was pretty swaggery and belligerent.  I asked him what he liked and he said Che Guevara.  The next week he came back and asked for that, not really even looking at me.  I said yes, here it is, and it blew his mind.  I saw him again and waved to him when I was biking home on Saturday, and he waved back.  It’s a pretty cool thing. 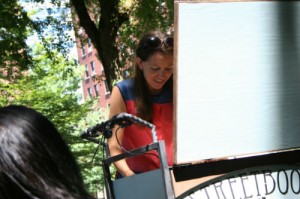 I'm the Head of the University of Oregon Portland Library and Learning Commons. I spend a lot of time thinking about learning spaces, videoconferencing, teaching, and design. I ride my bike to work. For the insatiably curious.